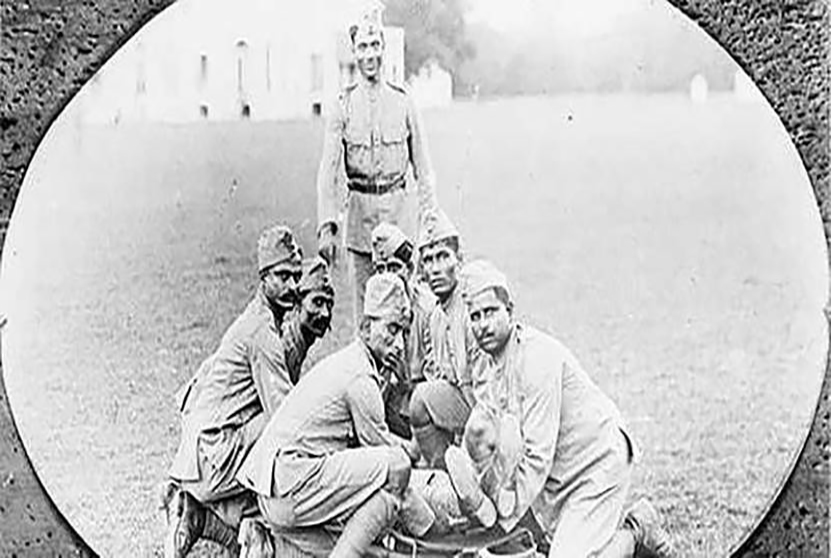 A few days ago, it was November 11. For those that do not know the significance of November 11, it is the date that Remembrance Day is observed. Remembrance Day is observed to recall and remember the sacrifices people took during World War 1. Remembrance Day is celebrated on November 11 because the armistice that ended the war was signed "at the 11th hour of the 11th day of the 11th month".  People around the world wear poppies (popularized by John McCrae's poem, In Flanders Fields, in which the first lines are "In Flanders Fields, the poppies blow/grow") and have two minutes of silence to pay respects to the dead. This year's Remembrance Day marks the 101st year since the end of World War 1. To celebrate the occasion, let us uncover the shroud of history and learn about Bengalis that took the greatest sacrifice of all and participated in World War 1.

World War 1 was truly a global conflict. What started out as a small dispute in the Balkans quickly spiralled out of control while engaging the era's great powers. Battles were fought all across the world in the most far-flung of places, from the trenches in Verdun to the shores of Samoa. The war killed many people, and as such encouraged empires to break old traditions and recruit able-bodied men from peoples they previously discriminated against. For instance, Bengalis were not allowed to serve in the British Indian Army ever since the Sepoy Rebellion of 1807, instead recruiting from "martial races" like Gurkhas, but due to high casualties occurring on the fronts and as such reducing manpower, the British Army allowed "non-martial races" like Bengalis to join the Army and fight. Many Bengalis answered the call to war and joined the Army, fighting in places like the Western Front and the Mesopotamian Campaign.

Despite the fact that Bengalis and other non-martial races were now allowed to join the Army, they did not have a big presence in the army as by the time World War 1 started, most recruits in the British Indian Army came from places where martial races reside in, like Punjab, North West Frontier Provinces (now known as Khyber Pakhtunkwa), and Nepal. However, especially in 1917, the British Indian Army started to make previously declared non-martial races into martial races and created new regiments out of non-martial races, because like previously stated, they needed more manpower, especially in the Mesopotamian Campaign, where they started to launch an offensive against the Ottoman Empire. One such regiment is the 49th Bengali Regiment, or the Bengali Paltan.

Originally called the Bengali Double Company (because it was originally 2 companies, both consisting of 228 soldiers), it was only army unit consisting purely of ethnic Bengalis. Recruitment of Bengalis for this regiment began on 30th August, 1916, in Calcutta (now Kolkata). The first ten troops of this regiment moved from Calcutta to Naushera on 12th September for training. More troops went to Naushera. The first regiment was split into three groups, and the first group moved to Karachi on January 1917 to get deployed to Mesopotamia (present-day Iraq) after four months of training. They left Karachi for Mesopotamiain July, joining up the rest of the Indian Expeditionary Force D, and reached Baghdad in mid-September. But since a lot of them got sick from the squalid conditions in Baghdad, they were moved to Azizia, then Al Kut, then finally at Tanuma, near Basra.

The healthy Bengalis spent their time performing security duties and receiving training. When the war ended on November 1918, the Bengalis remained in Tanuma and did post-war rehabilitation duties. In April 1919 a revolt occurred in Kurdistan against the British, in which up to 235 Bengalis were involved in the conflict, suppressing the revolt. After coming back to Kolkata and joined up with the rest of the Bengali Regiment and was dissolved. While this was going on, the second group stayed in Karachi and the third group stayed in Calcutta, creating depots in their cities for recruiting new people. In 1918, a new group was recruited in Dhaka, and as such created a new depot for them in Dhaka. In the end, 63 soldiers in the regiment died of sickness and other causes.

To honour the sacrifices these men took to leave everything they had known and move to the plague-ridden deserts of Mesopotamia, the British Indian government erected a statue in Calcutta College Square (Now College Street, Kolkata) on August 1924 with this quote engraved on one side of the monument: "memory of members of The 45th Bengalee Regiment who died in the Great War, 1914-1918, To the Glory of God, King, and Country..". Bengalis were also members of the navy. Recruitment of "lascars" (originally used to refer to any sailors from any part of Asia, but became primarily used to refer to sailors specifically from Bengal) increased during World War 1. By the end of World War 1, Lascars consisted of 20% of the British maritime labour force. The deeds of the lascars were immortalized in Tower Hill Monument, which states that about 17,000 lascars died. But on the contrary, Indian sources cite the lascar death count as 3,427. Some of these lascars settled down in the coastal cities of England and became the ancestors of the first South Asian community.

While it is important to know about the soldiers who fought in World War 1 and remember their actions, it is also important to know about the non-combatants who also participated in World War 1. Over half a million Indian labourers were deployed in the Indian Labour Corps, and thousands of them were Bengalis. They supplied troops and animals with food, water, and proper sanitation. They carried ammunition and other necessities to the fronts. They built hospitals, barracks, docks, roads, railways, and more. They maintained tanks and other machines of war. The labourers in the Mesopotamian Campaign had to undertake the gargantuan task of modernizing infrastructure from Basra to Baghdad. They were the backbone of the army. Without them, the Army would not have been able to do even basic operations. These people are immortalized by the Basra Memorial in Iraq, which commemorates 11,000 labourers amongst 33,000 soldiers. Amongst all the Indian names, there are thousands of Bengali names, a lot of them used by people who lived in what is now Bangladesh. Examples of this are Rahim Ullah, son of Jakim Muhammad of Kanalpur, Sylhet and Rahman Ali, son of Yusuf Ali of Kashimpakh, Comilla.

Special thanks to The Daily Observer

Betterment of Self for Society